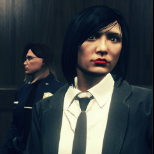 As the nights grew heavy and the skies rained down droplets in the shape of bullets on The Underground, they continued to remain patient and vigilant of the changes to come. The disbandment of the Bri

The Underground exchanged it's power.  Naomi Mizuno and Melody Frey discussed in detail that they wished Melody to take the reigns of The Underground. Under her newly found leadership, the factio