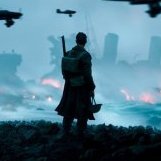 Somewhat recently reinstating into the Los Santos Police Department, Ilai Daniels was more than stoked to see what became of some of his old colleagues and friends, whether if they remained around, an